NIZ, WHEN STENCILING GOES QUITE MYSTICAL 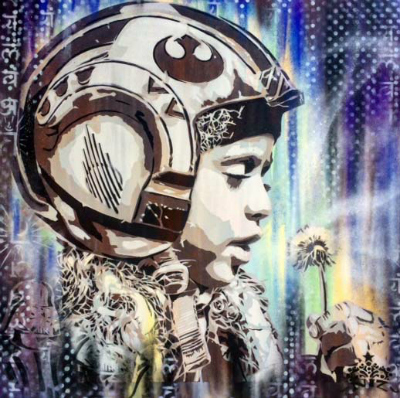 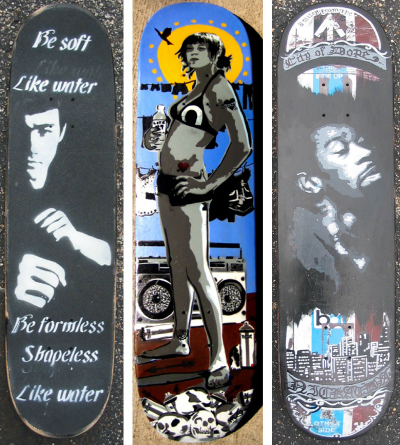 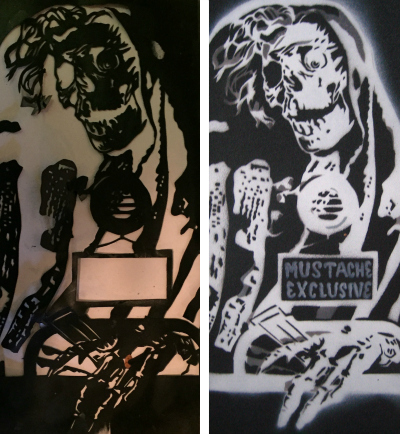 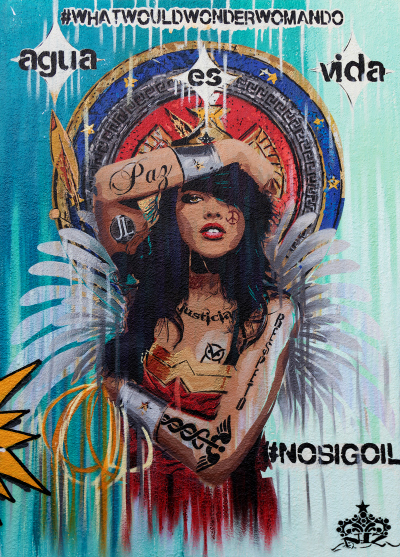 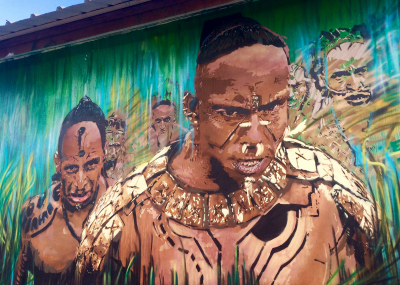 NIZ is a AUSTIN (TX)-based stencil artist whose figurative elements and abstract strokes of colors blend in a way that tends to verge on mystical reconciliation. For her, foreground stenciling and background brushing are two techniques meant to generate evocative images in some unique sort of sensual, spiritual and organic relationship that helps us re-embrace our own individual humanity. Harsh and recurrent political confrontations between conflicting urban parties, for instance, are stenciled by NIZ in assemblages of flamboyant portraits of persons or animals painted over rythmic moves of colors that lead us efforlessly towards a peaceful, spontaneous and beautiful conclusion about one-selves re-embedding together into nature. If NIZ started stenciling on modest surfaces like skateboards, she has been very successful in gradually enhancing her artwork to larger walls and now highly noble murals. NIZ is a solar and maternal stencil artist who has not yet finished flooding us with her impressive desire to question – but also surprise and delight – our world with her universal calls for action … Actually, she is just starting with it and that is precisely what we discussed over brunch during one of those strange rainy sundays in AUSTIN.

PLIPP : What is your view on the stencil art scene ?

NIZ : I think more and more people are doing stencil art, for sure, it is not to where it is widely accepted as an art form yet, really … I think it still has got a ways to go there but, as far as more people are doing it, I believe that there is more. Also, the styles and techniques are becoming more diverse. I think people are getting more creative about how to break up images into layers and make it look like something other than a stencil. Sometimes you have the problem of the stencil looking like a cut and paste on something that is very removed from everything else … So I think different people, in that respect, are solving that problem differently. Everyone is solving it differently. Some people will do graffiti and then the graffiti will bleed into the stencil, like C215. He has a way of making it look very broken up. There is Tankpetrol who uses negative space to break it up. He just puts the light colors on it and it is very graphic design, very poster looking. The way I do it is by using water paint and then bleeding. I paint mostly the background but then, at the end, I blend the two just to make it look more broken up and mixed. The colors in the foreground are in the background and vice-versa. I started doing it that way because it bothered me that it was such a chunk of something without any other context. I started by just trying to kind of blend a little bit and I liked that effect.

PLIPP : How did it started for you ?

NIZ : When I started doing stencils, I started small. I started doing stencils on skateboards, on griptapes. So, at the beginning, my stencils were limited to the size of the skateboards … Basically, that was my canvas for a long time. I did that for a long time until I got the craft down, until I was really good at just doing that. And then, probably through graffiti, through all the people that I know that do graffiti, I was pushed in the direction of going bigger with my stencils. But, for a long time, I didn’t know how to fill in a big space with the stencils. The first big piece I did was on a museum, on the outside of a museum here in AUSTIN. It was part of a young latino graffiti exhibit. It was so huge … I had trouble filling in the space … I had two large stencils and a couple of other little pieces to create a background but I was not sure how to compose it altogether … It was very intimidating !

PLIPP : And now, how do you position yourself in the stencil art scene ?

NIZ : I think my work right now, it is establishing itself. I don’t think you can categorize it quite yet but for me it is very psychological and it has something to do with ecology, like nature. I think there is some type of philosophy to what I am doing, so the background will represent nature. The foreground will represent the person and both of them are in relationship to each other. It is about saying something about a person with relation to their environment … So your environment bleeds into you and you bleed into your environment … Foreground and background ! That is what, for me, breaking up represents. It is the same thing with the colors … There is something about balancing the colors ! I like to bleed the colors like this one is trying to get in touch with this one and this other one is trying to get in touch with that one … Sometimes they meet and sometimes they don’t meet … It is a dialogue between the colors … It is kind of like the flux of life or people ! I think a metaphor for me and my stencils is just sort of a playful way of seeing how sometimes things connect. Sometimes, things almost connect but don’t quite connect … And sometimes, they do connect. For me, it is like a very spontaneous way of playing with that idea and looking at it and seeing how connecting colors makes the symmetry. The background, I want it to be soothing and easy to the eye … The foreground, I want the people to be more intense. I think that by making something soothing to look at, you can afford to be confrontational in a way that doesn’t make people feel like they are being confronted by something. Psychologically, it is like a way of dropping a very confrontational idea in a very inviting way. They are going to be drawn to that regardless of what the subjet matter is. They are going to want to look at it. So, yes, I think this is different than what some other artists do. It is not really political in the classic sense of the word but it can be.

PLIPP : Can you elaborate further on the direction you are taking now ?

NIZ : Lately, I have been into this whole animal and rational thing and all the dichotomies … Like instinct versus intellect. Animal versus rational. Angel versus sinner. All these different dichotomies. All these things you want to split up and try to control. I have been into kind of playing with them through doing one portrait and another portrait interacting with each other. What I am really experimenting with my stencil art now is that there is not such a clean divide … It is more mixed up ! I don’t think things are so black and white. I think that is a way of trying to control things, to make them easy to break down mentally. A good example is this scene that I painted out of this movie, Apocalypto. It is about Aztecs and the conquistadors and also about Aztecs conquering each other, with different clans … I painted a scene where the Aztecs are in a situation of fear. They are like full of adrenaline. And there is this conquistador looking at them. He is very cool, very collected … There is this idea of prey and who is going to be preyed upon … That stencil piece was a year ago but I am still obsessed with this concept of fear and power. This sort of got me on that whole train of thinking the psychology of it. A year ago, I also painted my daughter … People went crazy over the portrait of my daughter, identifying it as someone they know ! They didn’t see her as my daughter. That is why I like to throw in some mythological elements to the portraits of kids that I paint because kids are also so obsessed with magic. It is not just like a regular portrait of someone.

PLIPP : You are also known for your stance against city gentification …

NIZ : I like abandoned spaces a lot … I like the idea of taking something that is completely destroyed and not cared for and putting something of value on it so that everybody wonders what you saw in that space. It is like finding a secret garden ! My stencil work itself is not political but where I choose to paint and who I choose to paint is very political. In that context, I don’t aspire to paint for big corporations or big businesses. The setting is very important for me. One of the first political decisions that I had to make was just across the steet from here … We have been painting this wall for years . It was kind of like a cultural jumping point for a lot of people. A lot of us got to know each other here. In this area, like in a lot of cities, developers have been knocking things down around here and the area is becoming gentrified … Our wall was one of the first to get down … All of our artwork was obviously bulldozed and destroyed ! The developers wanted to rehire us to paint inside what we had done outside … They wanted it on a new wall, like super clean … Like we are cool … Like we are not really that big corporation … And they wanted us to recreate all this for really dirt cheap ! They thought they were doing us a favor. As far I am concerned, who I want to work with is important. Whether I believe in what they believe in, whether they have the same values, all this is important. I think a lot of people aspire just to make money but I don’t want to be so entangled in the chase for the money that I forget what I am doing. I don’t want to find myself one day in a place doing stuff that I don’t like with something that I thought was my dream. So, yeah, that is political.

PLIPP : Do you have a message to the world ?

Credits : All the illustrations have been provided by NIZ except the picture of the stencil template (in illustration 3 from the top) which was taken by the author during the interview.

Note :The interview took place around great food at the Yellow Jacket Social Club in AUSTIN.

Note : Additional excerpts from the interview of NIZ will be published in a new book due to be released by BRIGADIER PLIPP end of 2018.