LOGAN HICKS, WHEN THE CITY IS THE STENCIL MODEL 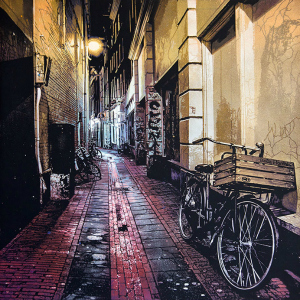 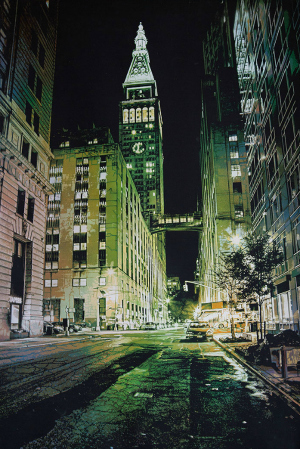 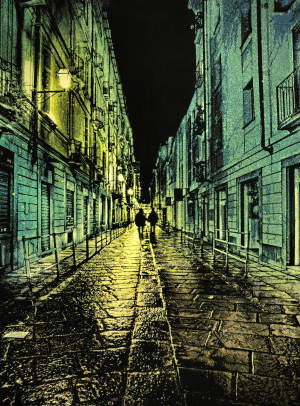 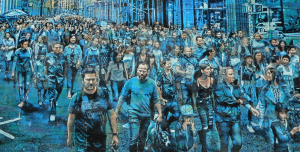 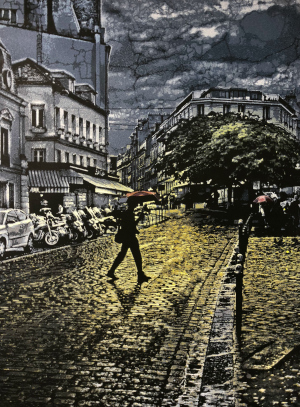 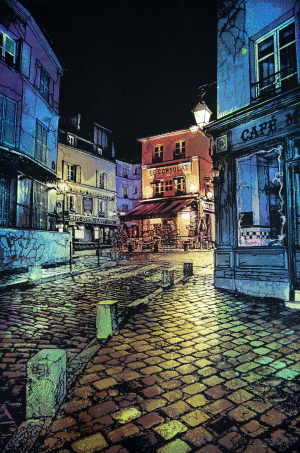 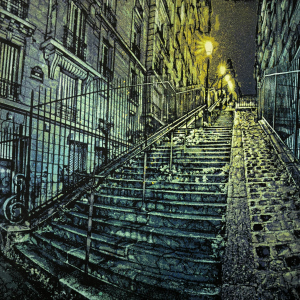 LOGAN HICKS is a Brooklyn-based artist using multi-layer stencils to capture deep and intimate urban atmospheres and coax them into fine art performances, constructing on canvases, with magnificent mastery, the necessary key elements that make streets, sidewalks, walls, windows and bricks come to life at night. As one of the top stencil artists, LOGAN HICKS continues to refine his art and his technique as if on a constant mission to search for new and elegant ways to bridge the gap between reality and perception of reality. Angling for distorted perfection and translated emotion, LOGAN HICKS multiplies layers and colors until reaching a piece of art that is not just worthy of spraying and exhibiting but that is also calling us to remember how an extreme stencil image can flip the script of a nocturnal city vibe into a entirely new and proprietary experience. Our discussion with LOGAN HICKS was rich and expressive, just like his amazing and complex stencils are :

PLIPP : What is your view on the current stencil scene ?

LOGAN HICKS : I think stenciling in general has moved from a novelty to more of a medium. In the beginning, when you said you were a stencil artist, there was a certain idea that people had … There was a very specific look … There was a very specific subject matter … What happened would be people thought of like one-layer stencils. Now you see more and more artists, fine artists, incorporating spray paint, incorporating stencils and stuff like that … So it is kind of the same way that punk rock used to be for a very small segment of society that enjoyed it and that resonated with and that participated in it … But as things have kind of moved on, now you see corporations using punk rock music to sell stuff. I think in a way stenciling has sort of gone that same way ! Just with anything that is good. In the beginning, it is a small group of people that appreciate it and that understand it and that embrace it but anything that is good is going to be universally a good thing. So it may take a little while for it to catch on but now, it is the same thing with stencils. You see corporations using stencils to sell ads ! You see fine artists incorporating it in their work ! You also see stencil artists continuing to use it. I guess the good side is that the more people that are involved with stenciling, the more the medium is pushed and the broader it comes. The bad thing is that once any movement becomes self-aware and it starts defining itself, it is kind of limiting in a way. So I think that you have a lot of artists that are getting into stenciling now and they start doing portraits of MARILYN MONROE and CHE GUEVARA  and there is just such a huge middle ground of very mediocre stencil art … There is only a few people that really kind of push stencils to the level that they need to, really. In the beginning, there was only a very few local pockets like LONDON and certainly PARIS … There was these individual hubs that embraced stencils but now it is a global thing. I mean, it is not a good or a bad thing … Technology is as much as you make of it. I think as long as your decisions are very conscious decisions, as long as you are thinking about what you do, anything can be good. But, when you turn on your computer and you see four million stencil images, I think that unless you have a unique vision, it is hard to find yourself ! It is hard to find what your voice is because there is so many voices out there. For myself, I am lucky … I kind of got into stenciling before I even knew that stenciling was a thing ! Stenciling was always a substitution for screen printing for me.

PLIPP : Do you feel being part of the stencil community  ?

LOGAN HICKS : No, I don’t really think of myself as a stencil artist. I think of myself as an artist that uses stencils … I think that if you define yourself as a stencil artist, there are rules that come with being a stencil artist. You have to do this. You can’t do that. What drives my work is my vision, not the medium. Right now, I use stencils. Right now, that medium suits my vision. But I feel like any true artist has a vision and the medium that they use to get that vision out is subject to change. I think some people get really hung up on stencils … There is a lot of people that are doing illegal stencil work and that they need to replicate the same image dozens of times per night, quickly, with one layer … I know that it is their objective and stenciling work well for them ! I applaud them but that is not my goal. I see them the same way that I see tags and graffiti and everything else. I don’t ignore it but, no, it is not like they are my brothers.

PLIPP : Was screen printing your starting point into stencils ?

LOGAN HICKS : Yes, I translated the screen printing process into stencil. I was always multi-layer but my stuff in the beginning was more decorative. There was not necessarily a message or anything like that … My early stuff looked like a poster for a band but without text … It was mostly graphic design and laying out the patterns and the colors and then just see how things work. It was only over time that I saw these threads and this commonality to what I was doing and that I understood there was a reason for doing that. So, for me, the fine art aspect kind of came in later. The beginning was mostly just design. I had moved from Baltimore out to California and I had a lot of free time … I had no lifestyle back then, no place to go, no money … Stenciling is a crude medium. You can pick up a piece of paper and you can make some art  So, for years, I was learning how to make stencils. I was learning the technical side of this stuff. Stenciling is a language and the first couple of year you learn all the words of the language. Then, once you understand the language, it is no longer a question of whether or not you can speak it … It is what you want to say with it. For me, it took probably about seven years before I got to a point where I realized that if I wanted to make someting look dreamlike, I could do that. If I wanted to change the lighting, the colors, whatever else, I could do it. So I guess around 2007 is about the time that I started embracing the fine art side of stencils. That was when I moved back to the East Coast and my son was on his way that things kind of picked up.

PLIPP : Where do you find your inspiration ?

LOGAN HICKS : Cities … I think of the city sort of as a living being … Every city has a rythm to it. When you look at something, how your eyes jump from one place to another place to another place, in that sense, I can see life. There is something that may invite you to continue walking, something that may stop you right in your tracks … Sometimes it is hectic and sometimes it is sleeping. Sometimes iit is energetic. Each city has its own personality and so I think that the trick is finding an aspect of that personality that you want to show. A lot of what my work is about is just how people react in that space and the way that each city lives and breathes. My work has three different stages : It has the photo stage, the computer stage and then the painting stage. The goal of any artist is to continually refine and perfect whatever it is that drives you. I see things that other people don’t see. I take a simple medium of stenciling and I find a way to complicate the shit out of it. The work that any artist makes mirrors their personality. For me, I can’t leave things alone. So I look down a street and there is an area missing, then I will put in a street light there … Then there needs to be a person walking and … Ah ! Then, the next thing you know is that I have used a photograph to actually create a different world. But usually, I would rather take things away ! I don’t like advertisements, I don’t like fashion stuff that dates the piece. I try to remove things like cars … Even if there is a store that would be like a trendy store, I would prefer to remove the signage from it ! I like things that are more permanent. It is about timelessness. The feeling of the place is more what I am going after. I don’t try to produce a place that doesn’t actually exist. I just try to refine what is already there. If you look at the colors that actually exist in the pieces, these are not necessarily the colors that you can physically find there. I don’t try to paint things realistically. I paint the feeling that I have about the place. It is more about the feeling than it is about the realism. What I am pianting is my reality. Otherwise,I would just take a photo and present a photo. This is also why I take my original pictures at night … At night, you focus on the city whereas during the daytime, at least for stencils, its doesn’t read as well as it should. When you have light shining on something, you sort of imply a certain importance to whatever the light is shining on … But for me, there is not a single part that is more important than another … It is entirely the city !

LOGAN HICKS : I don’t have a message for the world. I have a hard enough time figuring out what the message is to myself. My art is kind of like the way the world is … For me, my art is more contemplative. It has never been political. If people mind their own business, the world would be a lot better place. So that is about it.

Note : Thanks to the owners of the Bonvivant restaurant and wine bar for their kind hospitality.

Note : Additional excerpts from the interview of LOGAN HICKS will be published in a new book due to be released by BRIGADIER PLIPP end of 2018.