TRIPEL, WHEN STENCILS ARE ROOTED IN DEEP (ITALIAN) CULTURALITY 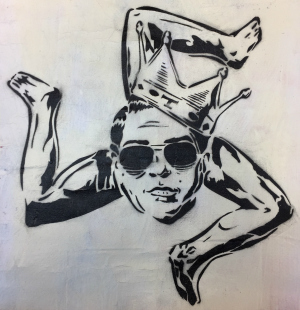 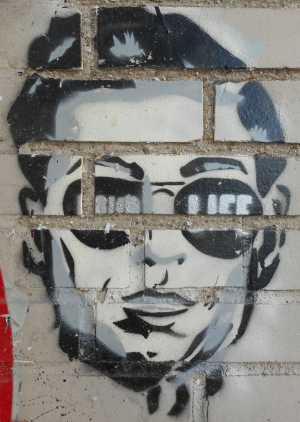 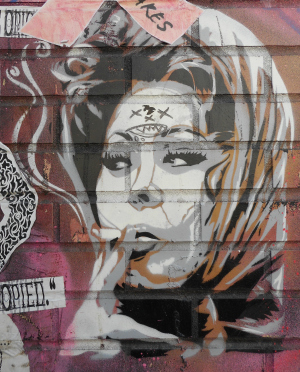 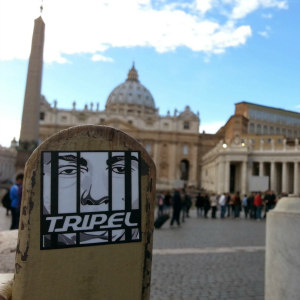 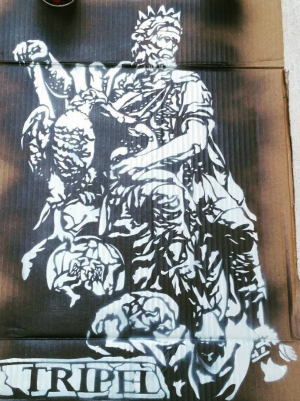 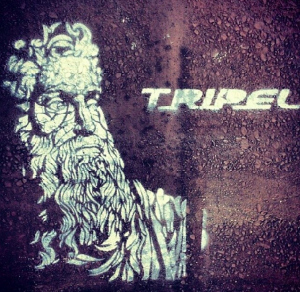 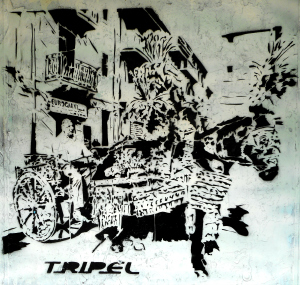 TRIPEL is a Brooklyn – based stencil artist who is very well versed into Italian culture and history. His street artwork is rooted in this deep scenic past but without any dramatic nostalgia. His stencil trajectory is mostly inspired by folkloric and familiar references that include mobsters and actresses as well as famous ancient figures. A recent stone sculpture apprenticeship in Italy completed his conviction that stencils should be more carved than sprayed on walls. So, instead of retrospective regrets for old art manifestations, it is rather with joyful pride and rare erudition that TRIPEL uses the expressive possibilities of stenciling to illustrate his imaginarium of Italian places, events and characters. If Manhattan and Brooklyn are now his most immediate locations for painting, italian cities like Pisa, Palermo and Roma have already given TRIPEL numerous urban opportunities to close the tributive loop exactly where it all started. TRIPEL lights up when describing both his inspiration and creation … Excerpts of this very enriching discussion :

PLIPP : What is your view of the stencil art scene ?

TRIPEL : I think before BANKSY, it was small … Just BLEK LE RAT, JEF AEROSOL … After that, it got in the media and the scene really blew up after the movie “Exit Through the Gift Shop” by BANKSY. I think every year there is more and more people doing stencils. The movie inspired a lot of people. When I look on social media, I see stencil artists everywhere. I think it is growing … Expanding. In a way, it has been around forever … The original stencil artist was the caveman ! I think people are starting to respect stencils more because you can do something very detailed and beautiful very fast. For somebody with a can, they would have to sit there one hour but with a stencil, you can do a beautiful image within under a minute …  You have to stay home and cut and prepare but when you are ready, one minute ! A lot of people are noticing that. Instead of just putting your name, peole want to put imagery and stencils are a very efficient way of putting a very detailed and descriptive image up very fast. It could be for fun or for a political reason … All over the world they use it. Sometimes people just want to express themselves about something they like or dislike. Altogether, I think it is definitely progressing. It is a growing art. Stencil artists like C215 and DUDE COMPANY are pushing it globally. And stencils are becoming more accepted in the graffiti world. Most graffiti artists, for instance, don’t like wheat paste but if you do a really beautiful stencil, they will leave it. They will respect it.

PLIPP : How did stenciling start out for you ?

TRIPEL : I have been drawing my whole life … My uncle is a carver. My mother always drew on the walls of my house. My father’s grandfather was a packaging designer. He was a real artist. I studied business in college. My father told me business, business, business because he said artists have no money. But after college, it just poured out of me and I started drawing … I would start watching something on television or I would look through some book and I was so inspired by it that I wanted to start making stencils. I just wanted to be creative … I just wanted to create even though I knew I couldn’t make a living from it. So I started doing stencils after I saw the movie by BANKSY. I saw the movie and I made a sticker. Then I made a stencil and I put it on the street. Then I got some feedback … Some girl put me in a blog. So, I realized people liked my stencil and I kept doing it ! I also started to make shirts and hats. I also make a little money doing some logos, stuff like that, but I don’t make enough to live so I have to work. The name TRIPEL started as me and a friend wanted to do a clothing brand. It was going to be named LLL for Live Life Loud. Then, I decided that I didn’t want to do the clothing brand anymore and an other friend told me that TRIPEL sounds better. When I looked up the origin of the word, it meant Strength. I liked it and I just stuck with it … Once I started building that name TRIPEL, I didn’t want to change it because people already knew it.

PLIPP : What is your main source of inspiration ?

TRIPEL : I feel like the best art in history started in Europe. The Renaissance period and all the art from that era has always played a big role in inspiring artists. I was in Italy and I was blown away by the art culture there … You look around and you see like cement casting on buildings, marbles scultures … I almost want to bring that culture into my art here and make people realize where everything came from. There is much more to be inspired by when you are in Europe for artists. America, I feel like, is more pop art. Also, I like imperfections. Sometimes things can be sloppy and then, sometimes, they can look really clean … I don’t really think about it too much when I do my stencils. I just get a pen or a marker, I get in the zone and I don’t even think about it … I just draw. The only thing I keep in mind is not losing bridges because without bridges, the stencil will fall apart. Keeping the structural integrity of the stencil is very important while still making it look good. If you make one wrong cut, the whole center will fall out and then you have to go back with tape and try to fix it. That actually comes more into play when I am cutting. I think sometimes people don’t really care about all that detail that you put your stencils if what the images you are doing are very clever. That is what is really catching the attention. It is the idea behind it ! So, you either have to do something insanely detailed that visually blows people away or you just have to do work that is very clever. It could be funny, it could be humor, controversial or something about current events, politics, whatever. It could be somtehing that nobody has thought of before … Things that are in the back of people’s mind. Sometimes, the things I do are very appealing to me but it doesn’t always ring a bell with everybody else !

PLIPP : How is all this evolving right now ?

TRIPEL : I am just going to keep doing it … I think if you do it long enough and you put passion into it, then eventually people will see this passion and you will get recognition. I want to be remembered for something positive I did. I want to leave a mark … If I do a piece that somebody remembers, I leave a mark. People will reflect on what I did. Before stencil art, I wasn’t doing anything special. Now, sometimes, people will contact me and say they have loved seeing my stuff around. It makes me happy. It inspires me. I have never really thought about what I am doing and why I am doing it … I think it is just organic, natural. I am still finding my style. I am still in progress figuring out what I want to do. If I didn’t have to work and I had all the money in the wworld, I would just travel. Perhaps I would have a big studio with people helping me but, yes, I guess my ultimate goal would be to live off my art and to travel the world.

PLIPP : Can you tell us more about the Sicilian Carriage stencil ?

TRIPEL : I have wanted to do that for a while … My family is from Palermo in Sicily. I was born in Italy. I have had that in my head forever ! I just love all the detail, the background that you can see, the buildings and the guy on the horse. It would be cool to do that in color too, because Sicilian horses and carriages in color are beautiful. That is how they look in Sicily. It is just a very traditional part of Sicilian culture. They always decorate these carriages with bright colors like yellow, blue or red … Everybody has a different one. Gorgeous ! But doing this stencil in colors would be a much bigger project !

PLIPP : Do you have a message to the world ?

TRIPEL : Let your passion and your culture show through your work !

Note : Additional excerpts from the interview of TRIPEL will be published in a new book due to be released by BRIGADIER PLIPP end of 2018.