STEW, WHEN AN ORNITHOSTENCILIST SPRAYS WINGS AND FEATHERS 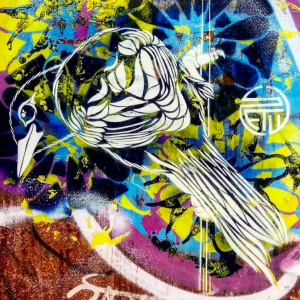 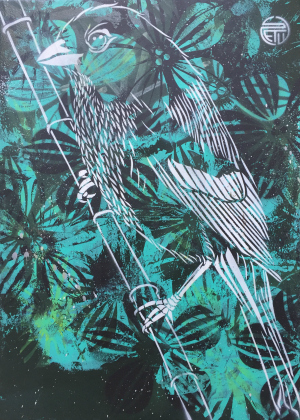 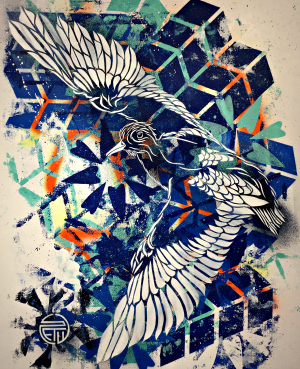 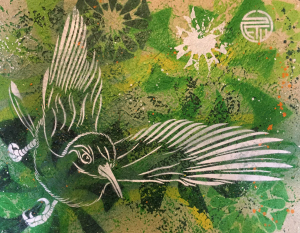 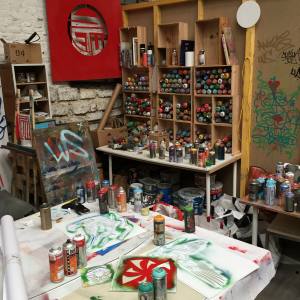 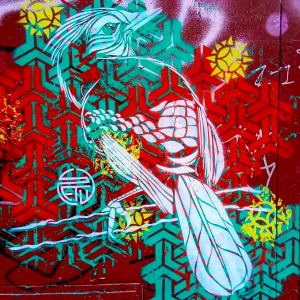 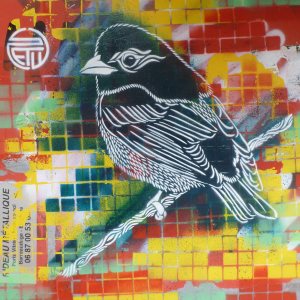 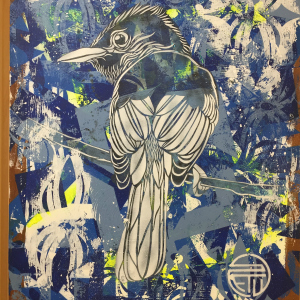 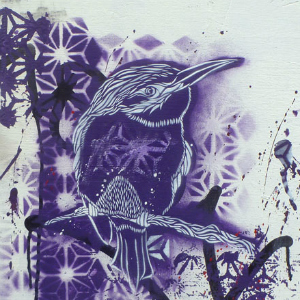 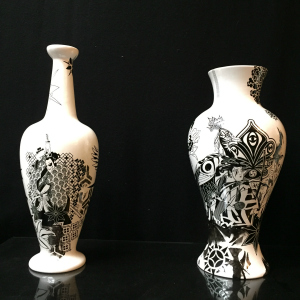 STEW is a Paris-based stencil artist of some contrarian sort. While many stencilists tend to spray color-rich items over a rather monotonous background, STEW goes quite the opposite way … Keeping his front pieces pristine white and immediate, the artist indeed likes to first assemble and paint colorful and complex back patterns across his elected surfaces. This inverted approach is undeniably his distinctive signature, obviously challenging the usual and accepted ways of catching the eye of stencil viewers. But STEW also gets and shares with us an additional thrill from his stenciling acts that is related to his unique choice of subjects : synthetic birds ! Designed with mimetic imagination and delivered with ornithostencilistic assurance, his recomposed white birds animalify the joys and delights STEW is dedicated to bring to our often grayish cities and gloomish lives. Constantly engaging and meticulous in his stencil craft, STEW knows exactly how to make us simply happy … So we shouldn’t let these white birds fly away. We should cherish them instead and spend a moment reading what STEW has to tell us about his artwork :

PLIPP : What is your perception of the current stencil art scene ?

STEW : The scene is getting bigger. Stencils are back ! It’s a technique that was rather abandoned in the 90s, but stencils are making a comeback with new artists. It is mainly new artists who are making stencils popular again. Young people are starting to use stencils thinking that it is quite a cool technique after all … The technique is tedious because you have to cut out templates and spend lots of hours in the workshop, but then it is very fast when you are out in the street. The results can be seen in just a few seconds. Then, there are also a few older artists who had abandoned the technique somewhat but have recently come back to it. All this means that it is very hard to stand out, in terms of style, from artists who have already established their reputation and already done a lot of stenciling. The technique is quite strict. There are constraints such as the need to make bridges. There are some artists like C215 who have gone into portraits and use stenciling technique for portraits. These days, it is quite hard to successfully do portraits without having them look like C215’s work. The same applies for architecture with LOGAN HICKS whereas JEF AEROSOL is an older artist that we haven’t seen much of in recent years but who has made a comeback with his very photographic work. Having said this, I think that stenciling, as it was seen in the 80s, was meant to be more of a protest, more non-conformist. Now, we are more into aesthetics, I think.

PLIPP : Do you feel that stenciling has lost its raison d’être ?

STEW : No, I think that the message has stayed the same throughout. The act of painting in the street is already a message. Whether you do a flower or a skull, it is the act first and foremost that is the protest ! You are breaking the law because you don’t have the right to paint on walls … So, from that moment, we are all in the same boat ! Then, yes, there will be some stencilists who would go a step further by putting a slogan on their images but I don’t know if it is really useful. In my view, it is already such a positive thing to go and put some colors in the street ! That is quite enough for me. We are already so much mobbed way by advertising, posters, billboards and so on. It is not my responsibility, as an artist, to stand on a wall and tell people what to do. I am there so that people, who usually walk past a grey wall, have a bit of color and can escape a bit  from their daily routine… That is all. Personally, I don’t have any political message. I am not into protesting or demonstrating. I don’t see myself ever stenciling political slogans. What interests me with my bird stencils is something more consensual and aesthetic. I might use stencils less in the future, but I will always use them as they are totally part of my creative process. They are a part of me and my life. People recognize me through them !

PLIPP : How did you start stencilling ?

STEW : I came to stenciling through screen-printing. I was a graphic designer for years and did a lot of computer drawing. To get away a bit from digital technology, I started doing screen-printing on textiles. So, for me, stenciling is first and foremost a way of transposing textiles. I started, rather spontaneously, to draw a Samurai stencil and I found myself really enjoying the technique. I find it very relaxing to spend time cutting. You have time to think. The process empties your mind. That is one reason why I continue to do stenciling. I have done plenty of works using stencils, but it is not an end in itself. It is more a way of studying for me. For that reason, I am not a stenciling purist. Screen-printing and stenciling are almost identical techniques except that you don’t need to make bridges in screen-printing. In screen-printing, you can create a very complicated picture and transpose it straight away whereas with stenciling you really need to think it through beforehand so that all the pieces of the puzzle fit together. But both techniques use the same principle of one layer per color and one overlay per color. This being the case, my feeling was that making several layers was like cheating a bit. Once you have two or three grids, you already have something that looks very much photographic. I didn’t think it was very interesting for me to go in that direction because we already have photography to do that ! Instead, I decided that my illustrations would be made of a single layer using whites, using light. Some people work with black paints, but I prefer white paints. It is a twist that comes from screen-printing maybe. For my birds, I use only one layer, of white. They stay monochrome. It is also quick to do in the street.

PLIPP : Can you tell us about your technique ?

STEW : I do a bit of free-hand tagging to begin with and then I stencil my background layer. I produce positive and negative images of my background motifs, meaning that I put a stencil on the wall, spray it and then, before the paint has dried on the stencil, I quickly turn it over and apply it again to the wall. So I have the negative image of the design as well. I believe doing so brings back matter, energy and spontaneity into my artwork. That is how I put together my backgrounds. It happened by mistake, actually. There was a gust of wind one day, which turned a stencil over, and I thought the accidental outcome looked quite good … So, I kept doing it. I use photographic paper for cutting because the paint does not soak into the material too fast. It stays longer on the surface and I can flip the template over more easily.

PLIPP : What are your favorite subjects ?

STEW : There is JIZO, a masked itinerant monk. You don’t see his face. He holds a stick and a bowl. He is not begging but simply asking people to give him something to eat. He doesn’t want money … He just wants to eat. He was the first character that I drew with the aim of producing a stencil. It is a composition of several images that I have put together to make a single image. My monk character is my guardian and I know that he will follow me and stay with me around all the time. I still reproduce him quite often, in different sizes. The largest JIZO stencil is 4 metres tall. He is my lucky charm in some ways. He represents a much simpler life. He truly brings together all my aspirations. I also have my birds, of course. They are also compositions. I take several birds and assemble them, combining different parts and pieces, in a unique way. I defy anyone to find my birds in nature ! It is their surrounding colors that give them their names. The birds clearly come from a special period of my life. I started to paint them when my little daughter was born. I made my white birds over these very colourful backgrounds. It is like I found a completely different freedom with my daughter !

PLIPP : Has your work evolved recently ?

STEW : I quite like working with craftsmen whose skills have been passed down the generations or with people with modern skills and who use them to explore new media. Design has also always interested me. Every year, I grab all my drawings together and put them all into some black and white montages. It is like recycling … I print them in several scales, I tear them apart, I cut them into smaller pieces and then I recycle everything back into new montages. You can often find traces of these montages in the background of my canvases. This black and white side works brilliantly as a design base on textiles or vases. I like exploring lots of things, actually ! I don’t just stick to stenciling.

STEW : My message is to be curious about everything and open to everything. It is to not prejudge people without getting to know them first, whether it is a group of people or a single individual in the street. I would like us to be more curious about humanity !

Note : Thanks to ALLA GOLDSTHEYN and PHILIPPE LALANNE for helping gracefully with the preparation and conduct of the interview.

Note : Vases decorated by STEW have been manufactured by FAIENCERIE GEORGES (Nevers, France) and shown at the ESPACE OPPIDUM gallery.

Note : Additional excerpts from the interview of STEW will be published in a new book due to be released by BRIGADIER PLIPP end of 2019.